You are here: Home1 / What Next

A more complete explanation for biological structure, architecture and function 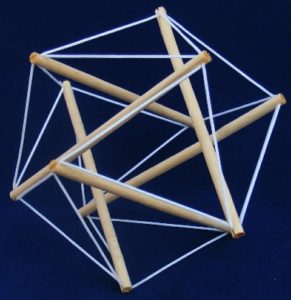 The biotensegrity concept is different to what has gone before because it is based on first principles and from which everything else is derived, and thus represents a paradigm shift in the way that we think about the human body, and every organism.

Tensegrity models are physical representations of the invisible forces that hold them together, and the same applies to the whole of biology, where we refer to these forces as ‘attraction and repulsion’ and ‘tension and compression’. So, we cannot literally see the tensegrity-icosahedron within the body because it is simply a diagram that represents the balance of those invisible forces, and the same principles apply to anatomy:

Geodesic geometry – where these forces always act in straight lines but can give rise to complex curvature at higher size-scales;

The efficient close-packing of multiple components into the smallest amount of space, where each part is nested within (and functionally dependent on) all those surrounding it;

Minimal-energy – where everything happens in the simplest and most energy-efficient way possible;

Our understanding of the biotensegrity concept and its relevance to living organisms continues to develop as we explore new avenues relating to the newly-emerging fields of soft-matter, which recognizes that biological materials are not ‘solids’ and ‘liquids’ in the traditional sense, but can display characteristics of both and include – polymers, colloids, emulsions, surfactants, foams and liquid crystals etc – at least some of which can shift between one phase and the other as the result of mechanical, electrical and temperature stimuli.

The coupling of structural anatomy with the haptic perceptionTurvey, Cabe, Doyon system is now being examined through the lens of biotensegrity because both appreciate the invariant scale-free organization that is necessary to unable them to operate as they do.

There is also an ongoing project to formalize the math that underpins biotensegrity, and which includes Dynamic kinetic stability, Constructal Law and Super-stability etc. The following summarizes latest thinking on this particular aspect:

“Biotensegrity is a very specific and informative term, which has a strong position embedded into it. ‘Tensegrity’ is a precise mathematical/architectural/mechanical concept that implies dichotomy. It is either a tensegrity or not. It is a commitment to a specific interpretation of force resolutions within the system under mechanical loads – pointing out that it has super stability via internal self-stress that makes it kinematically indeterminate. In other words, the forces resolve through the system in a distributed spreading manner via tensional members first (with compression members serving as tension multipliers). It implies tensional logic behind the internal mapping of the force distribution/resolution within the system. Thus the statement of ‘biotensegrity’ carries maximum information in it – it is a ‘meat cleaver of reality’ – where one cannot be on both sides at the same time. The opposite of ‘tensegrity’ is a system with compression logic, where the compression members play the primary role of defining the internal resolution of forces (and tension members ‘assist’ the compression members) – which is the central assumption behind standard biomechanics, kinesiology and functional anatomy.” Leonid Blyum (Facebook, February 2020).

So, while the geodesic geometries of the platonic solids and tensegrity models are sometimes dismissed as being too simple an explanation of complex biological structure, let alone have relevance to biomechanics or any practical application, the above summarizes some of the advantages of the biotensegrity concept and its model demonstrations; and all these pages are making a start in elaborating on this. The biotensegrity concept describes an energy-efficient structural/architectural system that replaces the outdated biomechanical model from hundreds of years ago and enables complex biological organisms to be understood in terms of first principles.

This website uses cookies to improve your experience while you navigate through the website. Out of these, the cookies that are categorized as necessary are stored on your browser as they are essential for the working of basic functionalities of the website. We also use third-party cookies that help us analyze and understand how you use this website. These cookies will be stored in your browser only with your consent. You also have the option to opt-out of these cookies. But opting out of some of these cookies may affect your browsing experience.
Necessary Always Enabled
Necessary cookies are absolutely essential for the website to function properly. This category only includes cookies that ensures basic functionalities and security features of the website. These cookies do not store any personal information.
Non-necessary
Any cookies that may not be particularly necessary for the website to function and is used specifically to collect user personal data via analytics, ads, other embedded contents are termed as non-necessary cookies. It is mandatory to procure user consent prior to running these cookies on your website.
SAVE & ACCEPT